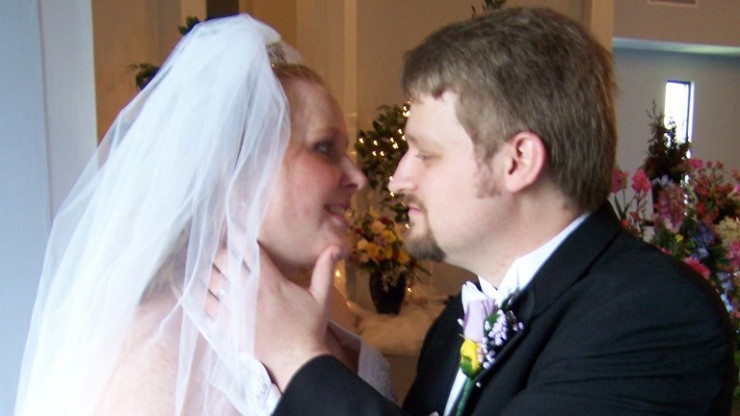 My wonderful wife offered to write for me today. She is truly a Proverbs 31 woman and I look forward to more writing from her as time goes on.

Trey and I had many discussions about marriage before our wedding almost 8 years ago. One of the things we immediately agreed on was making divorce a swear word in our house. Trey had mentioned that his parents did this (they will be celebrating their 49th anniversary next month) and it sounded like a great plan. We discussed that no matter what, divorce would never be an option for us. We agreed to always work it out. When we made this decision to be together “no matter what” it instilled such a major sense of security in me.

We have been told by different people that they look up to us as a married couple because of how much we love each other, respect each other, and how we can make people sick with how affectionate we are. My family has made comments about how it seems that I got it right the first time (I am the only person in my immediate family that is married that hasn’t been divorced at least once). When they tell me this, I respond with “the only time”. It is always a wonderful compliment when others can see how great a marriage you have.

No marriage is perfect. We have had ups and downs. We struggled through infertility, financial stress (including financial “infidelity” as Dave Ramsey calls it on my part), and just the usual day to day stresses that come with life as a growing family. It is definitely true when people say that when you first get married you don’t really know what love is… or maybe it would be better to say that you don’t know the depth of love yet. Love is so much deeper, stronger, and harder than that. I am sure that Trey and I have only scratched the surface of how great our love can be.

A few months ago we have been asked by separate people at separate times if we were alright. Apparently other people could see that we were struggling, and we were. We were just in a sort of funk that stemmed from not communicating clearly with each other and possibly a bit having to do with some postpartum depression I experienced this time around. It is during times like these, where we are struggling, that I am so thankful for that agreement we made years ago. I never worry about losing him, because I know that no matter how hard things get neither of us will walk away. Not that things were close to that, but I am so grateful to be married to Trey.

We are working on strengthening our marriage. It is hard sometimes with a toddler and an infant to find the time to focus on our marriage, as I’m sure anyone that has kids knows, but we try. This is where I am going to brag on my husband for a minute: When we realized there was a problem we talked about what we could do to fix it. One of the things that he suggested was to make sure that we study the bible and pray together every night. We had let other things get in the way and had slacked in that area. He has been so great at making sure we do that each night since. Him suggesting this is one of the reasons I fell in love with him in the first place. Before I met him I had decided that one of the qualifications of the person I would marry would be a man that suggested we study and pray together. We also have started writing in journals each work day and swapping them for the other to read the next day (I got this idea from some friends of ours that do the same thing) to just work on communicating more. We also tell each other one thing we love about each other before we go to bed each night.

I am so thankful and so blessed that I am married to someone that is as committed to our marriage as I am. I know that many people aren’t so blessed. My heart breaks for anyone in that situation. I will close this out by using a verse that I think encompasses how Trey has been, especially lately:

Ephesians 5:28-29 So husbands ought to love their own wives as their own bodies; he who loves his wife loves himself. For no one ever hated his own flesh, but nourishes and cherishes it, just as the Lord does the church.

By the way, if anyone that has offered still wants to watch our kids so we can have a date night, let us know. — Trey 🙂

Latest posts by DiscipleGeekette (see all)

Coupons Are the Best/Alicia is My Hero