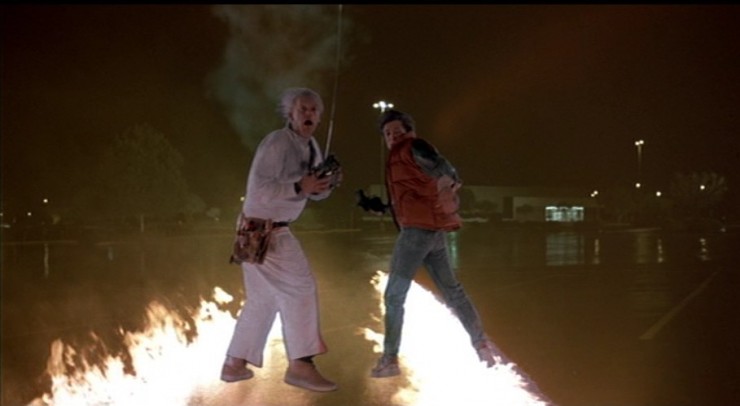 The Do over question goes: “If there is one thing you could do over in your life, what would it be?”

This question is supposed to get you to search deep inside yourself to find that one moment in your life that you regret the most. However, it’s not really that deep of a question. We all have regrets. Most people could spend all their time thinking about them if they’re not careful.

We know — at least we think we know — that Biff Tannen moment in our life. That moment where our lives were changed by one single decision, one missed ball, or one dump truck of manure. Life doesn’t happen like that. Sure there are moments in our lives that we’ve said or done something that we regret, but there are very few things that changes ones life drastically. Life is made up of decisions upon decisions and very few individually change your life.

The few that are the most important, however can be easily listed.

This is the most obvious thing I’ve probably said on this blog, and yet it’s definitely the most important.

This isn’t necessarily the choice to become a Christian, though it’s often the same. Those who are blessed to be raised in a Christian family are exposed to the values and mores of Christianity at an early age and often choose to use those as their guiding light — before the age of accountability. (I mention one such child in my article about Myra.)

Daniel is a great example of one choosing God’s word to lead his footsteps early on.

Daniel made the choice to follow God before it was ever a question, and this affected all his actions from that point on. Becoming a Christian is supposed to be much the same way, but often we have a lot of baggage following us that makes it more difficult to make the decision stick. Note that I said “more difficult” and not impossible. We still have free will and we can choose to overcome any regrets that might color a decision. More on that later.

The friends you pick, from grade school on up, affect who you are. In middle school, I had a large group of friends, we weren’t the cool kids by any stretch, but we were nice to each other and to other kids. I was pretty social back then.

Around 7th grade my family and I moved to another town and my angsty teenage mind decided that I didn’t want to be there, which resulted in my friends being the outcasts in the class. I lost whatever social skills I’d picked up from the previous years, became very shy, and when pressed into socializing I was even a kind of jerk.

Fast forward to just before I met Christina, I’d made friends with several really nice guys and they helped me overcome a lot of the social fears I’d developed. I went from being depressed a good bit of the time and avoiding people, to actually spending time with people at social events. It eventually lead me to meeting the love of my life.

Which leads me to…

Much like picking your friends, your spouse will affect who you are in your life spiritually and physically. I won’t go into too much depth here, as I could probably write a full article on this topic. It boils it down to this:

Find someone that will help you grow rather than wither as a Christian.

“Bless The Broken Road” by Rascal Flatts is one of our songs and it defines our thoughts on regrets very well. You see, we both have things that we can look back on and wish were different. However, only God knows where we would be, or who we would be with had we chosen or acted differently. Our past may have been messy, and we may have hurt people or been hurt ourselves, but without the pain, we may not have each other now. With that thought in mind, I wouldn’t change a thing.

The Bible shows us time after time events where tragedy was turned into glory for God. If you are currently struggling in life, or dwelling with regret, have faith. God can make that pain and those actions you regret have meaning.

As I mentioned above, sometimes the choices we’ve made in the past have consequences that make it more difficult to follow God. God can help with that as well. He’s provided help in the form of prayer, study, and the church. When you seek help with these regrets through these avenues, you can overcome anything. Ultimately, what matters more than the trials is that you remain faithful to him through them all.

While the Do Over in the sense of the question doesn’t exist, God gives us something even better. When we become Christians our slate is wiped clean. We are as pure as the driven snow, because we’ve been washed by Christ’s blood.

We get to start over, but He also gives us the chance to see the good come out of the regrets we have.

What good has He brought from your greatest regret?

Sometimes It’s About The Nail Are You Standing Still?