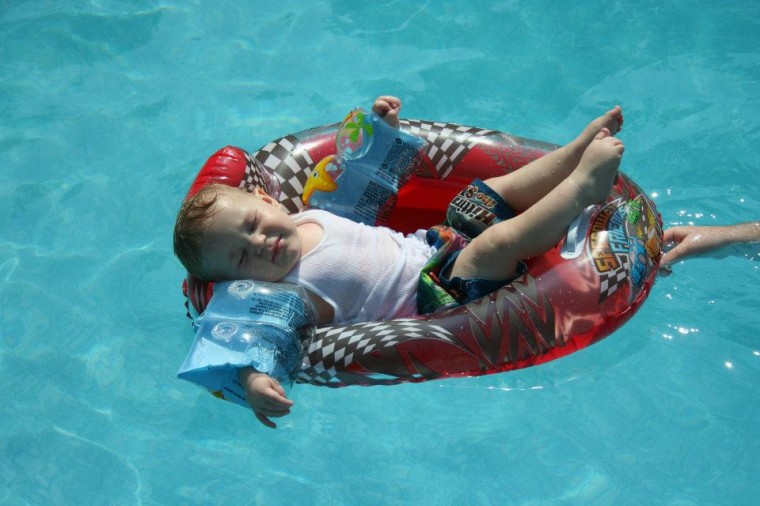 To say that my son takes after me is an understatement. He has the same facial expressions, the same tendency to dismantle things to just see how they work, and the same love for swimming and water that I had when I was younger.

Bath time is his favorite time of the day. He’ll often stop everything at the mere mention of a bath and go running to the bathroom saying “Bath! Bath! Bath!”

During bath time he’ll eagerly dump water from his rinse cup over his head to wet/rinse his hair. He’ll lay down in the water and roll from his back to his stomach and back again over and over. While on his stomach, he kicks his legs and says “Swim! Swim! Swim!”

The picture above is from Memorial Day last year. His excitement when he saw his papa’s pool was tangible, and it was all we could do to keep him from jumping in. He “swam” so hard he wore himself out and fell asleep on his float.

Unfortunately this year the water was too cold to swim for very long, but that didn’t faze him. After about 30 minutes of being in the water his lips were blue and his body was wracked with shivers. Once he warmed up, however, he was ready to leap back in.

I did too at one time. My dad jokes that anytime we had a pool when I was a kid, I lived in it during the summer. Lately, however, I just don’t get as excited about it as I once did. I’ve even found myself making excuses and finding other things to do instead of swimming.

Life got in the way. For one, I moved away from a house with a pool so I was no longer able to swim every day. For a while I would make the effort to find a pool or body of water to swim in, but as time passed, my First Love became less important than the other things in my every day life that were easier to do.

There is a parallel to this in the Bible.

Revelation 2:4-5
New King James Version (NKJV)
4 Nevertheless I have this against you, that you have left your first love. 5 Remember therefore from where you have fallen; repent and do the first works, or else I will come to you quickly and remove your lampstand from its place—unless you repent.

Jesus is warning the church at Ephesus that they have lost their love for Him. This is an easy thing to do if we stop immersing ourselves with the Word by letting life get in the way like I did with swimming. A child’s baseball game makes us miss Wednesday night class. Working late on Saturday evening makes for a convenient excuse to miss Sunday morning services. It’s always gradual, and never fully obvious, but eventually we let other things become more important to us than Christ. We’ve lost our First love.

It can happen to anyone.

It happened to me.

Thankfully, there is a remedy and it’s outlined in the scripture above.

“…repent and do the first works…”

When we first become Christians, we come out of that water — ironically enough — on fire for Christ. We live and breathe a zeal that compares to no other and we’re ready and willing to work for the Lord. We study ravenously, eager to hear the words that our Love has written to us. These are the first works that is referenced above, the things and the passions that we had when we first found God.

Don’t let the meaningless things in this life become greater than the eternity that awaits us.

Let us not lose our First Love.

Is your eyesight good? Freedom